At the Horsemen of Eire we're committed to bringing history to life, sharing hard won knowledge with the world in fun and exciting ways. For many historical cultures martial arts were a key expression of who they were and the times they lived and give an insight into mindset and way of life of those who learnt and taught them. We practice historical combat in a variety of forms and for a variety of ends, in full contact competition, for fun and fitness and in screen and stage combat, but wherever it all has it's origin in hours of background research.

Where it all comes from

The martial arts of past cultures left traces in many ways, in some we are even lucky enough to have the written manuals on the techniques and systems. Others there are only wall paintings and accounts of the combat to go on. Whatever it may be these systems have left indelible marks on our pop culture, from the brutal battle drill of the roman centurion, the mighty lance and sword of the knight, the sheer size of the greatsword, the lightning speed of the duellists rapier and dagger, the elegance of the sabre. Fighting systems the products of generations of training, preserved in historical manuscripts.

The last 20 years have seen a communities grow up around the study of historical martial arts around the world. A movement in which many of the horsemen have played their part.

One of our instructors doing motion capture for a Bristol University research project.

Our instructors have over a decade of experience in historical swordsmanship competing and have been invited to teach around the world.

Most recently competing in longsword at the European games in Minsk where Jack came away with bronze against a selected pool of the best fencers from around the world and co-instructor Sam took 5th.
We take our fencing seriously and our club Goats Head Historical Fencing currently ranks top among the Irish HEMA clubs for tournament placings and academic papers published on the nature of medieval fencing. 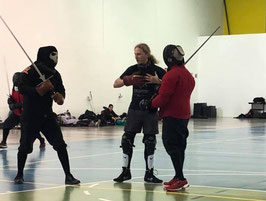 Swordfighting has been considered the pursuit of kings and princes for hundreds of years, for it's ability to work both mind and body, pick a weapon and feel the thrill of bare steel and flashing blades, whether for personal fitness, looking to improve your competitive fencing ability or preparation for a role requiring stage combat with a decade of experience teaching, performing and competing around the world we adjust to your level and needs. 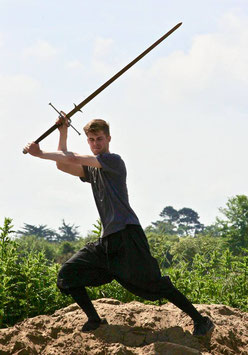 Perfect fitness for pandemic times, at a distance with a mask and preparing you for the zombie apocalypse that we're all fairly sure is coming. Pick your weapon and pick your time, whether you always wanted to fence like a muskateer, a knight a pirate or are already a historical fencer looking to improve their skills, 5 private sessions with your pick of weapon and style from the armouries.